Im pretty clueless when it comes to ropes.
Im trying to get an idea of the merits of different types ie spectra vs polypro, which floats/doesnt, load bearing characteristics, strength to size ratio and suitability for off river usage ie, suitability for climbing

Anybody got any useful links for this kind of thing
Top

I wont offer my own advice as I'm in the same boat as you.

Seeing as you're on a boating website, I presume you only want it for boating, and rescues.
Stick to ropes sold by kayak manufacturers. They're the best ones for what you want. If you want them for other applications, then try elsewhere.
For example, canyoning rope floats and would be a good for doing a lot of climbing, or a lot of water based rescues, but is much too bulky to put in a wee throwbag, and is only semi static(throwbags stretch more), and is too thick too use with standard 10mm pulleys which most people would have in their pin kits. A 100m bag if it would barely fit in the back of a creeker. It's also expensive.

What's the motive behind the post? Are you trying to find out about ropes in general? Or want to find the best one for you for kayaking?
Top

Bit of a change of direction on the rope question

I've changed recently to a waist belt type combo of throw rope and utility pocket with a long cow's tail. For me this is far superior to the old throw bag stuffed in the boat. I've had to use both throw rope and cow's tail on a few occasions and both worked very well.

Don't know how others feel about the over the shoulder cow's tail but I've always found it cumbersome to use on the water. Also a friend of mine recently got his o.t.s. cow's tail caught in a branch while making a pretty standard break out - freak accident but could be serious. I'm going to go with the utility pocket model only from now on.

On the original rope question; if you're going to paddle with others, buy and carry a proper kayaking throw rope/bag. Whenever you paddle with a group ask who has a throw bag. If anyone answers no, give them yours - that way if you swim ....

Much like JK I'm a little confused as to just what kind of information you are looking for, but I've been involved in boating / climbing and all things outdoors for more than a few years so might be able to give you some sort of useful info. I'm going to keep it boating related or else I would be writing an epic length of a post.

Just before I start I want to make clear that I am talking in generalities here and to most things there are always exceptions. If you have a specific question do ask away.

In throw bags there are two main factors to consider;
-Construction method of the rope.
-Materials used in construction.

As the diagram shows kernmantle rope is made up of an outer sheath and an inner core. This is widely recognised as a superior method of construction for technical ropes. So white water throw bags, climbing ropes, parachute lines etc

The other method the we see in throw bags is laid / braided rope.

This is made by multiple strands of rope braided together to from one line. This is often reffered to as "flat" rope

Braided ropes are often looked at as being inferior to kernmantle ropes but in reality they both serve a purpose. For just basic throw line applications both construction methods are suitable, when things start to get more technical such as using ropes to extract a boat or in a mechanical advantage things are different.

Braided throw lines are not designed to withstand the strains and stresses of technical rope work but are 100% perfect for throw line application.

Materials used in construction
This is where things start to become complicated as there is allot of confusion and miss information knocking about.

Ropes can be made out of all sorts of things with Polypropylene, Nylon, Polyester, Spectra & Dyneema being just a few of the names you hear about.

The factors that are to consider in ropes used in our environment are ability to float, thickness, visibility and strength. Each of the materials listed above have pros & cons when used / tested under load. As there is an almost infinite combination of what materials are used in throw bags on the market I will just use a couple of examples rather than try explain the every single one.

Well as you see Palm pretty much give you all of the information you need there. What you might also like to know that even though this is a nice 10mm thick which makes is good to handle, due to the fact its of braided polypropylene construction once under load of say a swimmer you are bringing into an eddy the line will deform very quickly. This means that under tension it becomes thinner thus harder to hold.
The pros of this kinda of bag is that they are general good value for money / compact / easy repack and at 600kg line strength more than strong enough for white water use.

You would find it near impossible to be in Wicklow any wet weekend and not see at least a few of these around, their popularity is well deserved as they are a tidy bit of kit.

These are still made 100% from polypropylene but as they are of kernmantle construction their strength is greatly increased. Another advantage of this method of construction is that the rope is less likely to deform under tension so if you are lining a swimmer into an eddy the rope will remain closer to its 10.5mm thickness and be nicer on your cold hands.

Ropes like this are also designed to but up with the rigours of being used to extract boats using Z drags or doing short abseils on trick portages. One of the draw backs is that these ropes can be pretty bulky / harder to repack. Also as the rope is 100% polypropylene that if you find your self having to use allot of mechanical advantage systems these can make your job tougher as they stretch under high tension which is more effort on you.

As you can see its over twice as strong along its length as the Palm bag due to its Dyneema core. The outside sheath is made using polypropylene as Dyneema does not hold knots as efficiently as polypropylene so a hybrid construction brings you the best of both worlds.

Another advantage is that as the materials used in its construction are so strong the rope can be made a bit thinner without being weaker and less bulky to carry about. Lots of people at this stage will rabbit on about thinner rope ie7.5mm in this case is like razor wire under load, the thing is due to its increased strength the line will not deform under load at all so its comparable with most other models on the market.

These can be used for any technical white water use and due to their low stretch / static nature they are extremely efficient in mechanical advantage systems. The only real down side of these types of ropes is that the extra performance comes at a cost of almost double.

Just for your information HF also do a non Syntec version of this bag which is pretty much on par with the above offering from Palm both in performance & price. 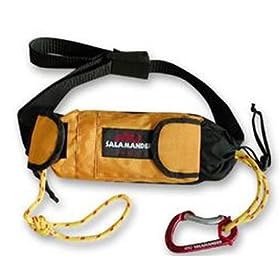 There are some throw bags available on the market that are constructed full of Spectra / Dynemma such at the Salamander Golden Retriever pictured or the Astral pocket throw line. As they are made this way is allows for lines of 5/6mm without any loss of strength and this makes then extremely compact and suited for waist mounting. There is no getting around it that any line that thin is going to be harder to hold on to under load but in my mind are perfectly suited for infrequent use.


Ok all that I have said is just barely scraping the ice of "ropes" and I didn't even tough on throw bag design, the thing we can take away is that there is a throw line for almost every application and budget. The best thing is to try figure out what you require from your kit and then look at what model out of what I have mentioned above or the dozens of others available in Irish shops.

Throw lines are one of the bits of kit that people don't put enough consideration into before they buy. If you have any questions ask away or if any quality retailer should be able to talk you through their stock and the pros and cons of each.

I'm going to stick my neck out here and say that if you are in a shop and get looked at with a blank face if you ask about these kinda things I suggest you turn on your heels and look elsewhere to where you can trust their advice.

Also if you are asking these kind of questions I might suggest you get yourself on an RSR or SRT type course and learn more about these skills that are as important as having a quality boof or perfect paddling technique.


Sorry for going on so long.

My motive was i suppose to try start a general discussion on something that I know far less about than I should do.

I suppose what triggered it was when i was looking at getting a replacement salamander throwbag and realised that i had very little idea of the actual specific differences between the 2 rope types available.
Thanks for the info Adrian