I'm going to take a crack at building one of these gauges myself....wish me luck.

I'm also going to post what I do and maybe ask a few questions. I'm sure if others are interested in building on this might be a good place to trade tips etc.

I must start of by saying that the instructions that Daithi has put together are class! Really comprehesive and worth a read even if you're not going to build one.
http://pei.ucc.ie/daithi/construction.html

Anyway I made the first step today, i received the PBC min - circuit boards i ordered form the states. 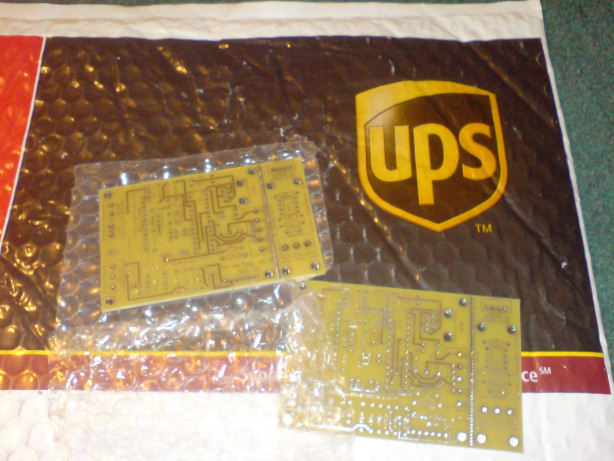 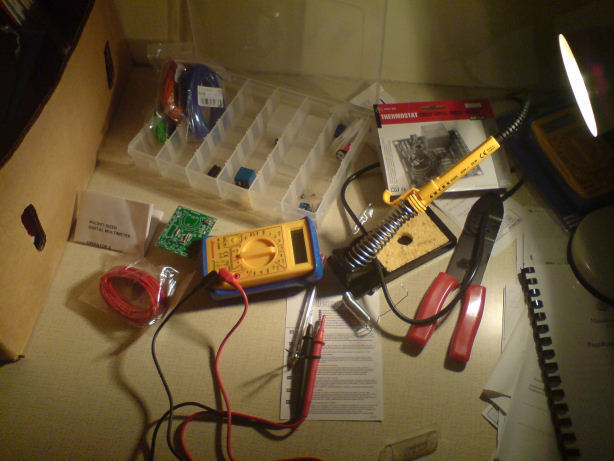 And I have my Soldering HQ set up also, its only a mater of time now, I'm sure the rest will be easy

Best of luck Seanie,
The construction page definately needs a bit of updating so it would be great if you could take photos
along the way and point out where you hit snags.
I need to build another sensor section myself for the upper Bandon so I'll add a few more pics and details
of that bit over the next two weeks.
DaithÃ­
Top

What's the thermostat for, Seanie?

We would leave home in the morning and could play all day, as long as we were back before it got dark. No one was able to reach us and no one minded!
Top

kernel wrote:What's the thermostat for, Seanie?

Just to practice my soldering, its been about 10 years since i soldered anything.
Top

I think I read it on DaithÃ­'s guide, that the circuit boards have to be bought in packs of three? It might be an idea to try and find someone else building a gauge somewhere, and the cost can be shared.
Top

The next step was to buy the list of electronic components.

Daithi has provided a BoM (bill of materials) in an excel file. And ordering the parts couldnâ€™t be simpler, just click the link opposite the item on the excel file (the Farnell No column) and when the Farnell webpage opens key in the number of them you want to buy. Hit buy and it will be added to your shopping basket (if its out of stock thereâ€™s usually an identical alternative). Just do that for all the parts that have a Farnell No or that you canâ€™t get for free.

The resistors can be bought in most electronics stores in resistor mix packs.

The parts arrived the following day. 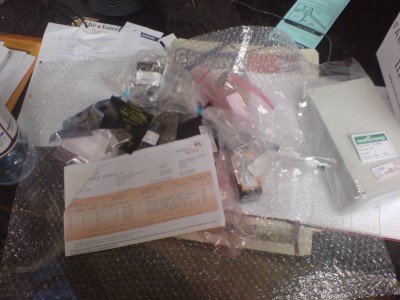 I have a Siemens C45 and I donâ€™t have a clue how to wire it. Ive tried to search for the schematics online, but i haven't had much luck. If anyone has a photo of a wired one or can mark this photo, it would be appreciated. 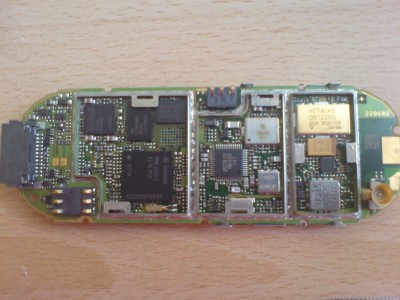 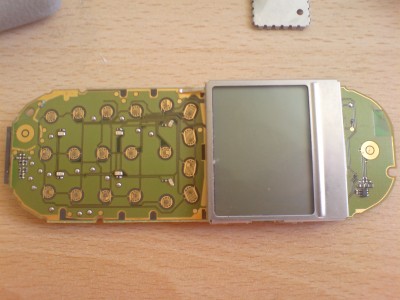 Also I'm a bit in the dark as to how ordering sample chips from Texas Instruments works ( i have made an account) . The chips are there with the part number, but they are proceed by a letter or two letters. So I'm not sure if I would be ordering the correct chip.

Also can I order them form Farnell, they say they are out of stock, will they order them back in if i try tuy buy one?

Anyway I have enough bits and bobs to get started with, I'll let ye know how i get on.

Hi Seanie,
What TI part are you missing? I probably have some spares.

Wiring the phone is one of the trickiest bits and should be left until towards the end.
I've put some pictures of the m35 job at http://pei.ucc.ie/daithi/m35/m35.html
The C45 seems to be fairly similar. A very fine soldering iron is needed.

It might be useful if you do the job in stages.
That way, there will be a logical sequence for anyone else wanting to build and they will be able to see what snags they are likely to encounter.

STEP 1: is to build the sensor portion of the circult.
Snap off the inch wide portion of the pcb. Its tough so you may need a vice to hold it. (protect the pcb from the jaws with a bit of cardboard) A junior hacksaw could also do the job. File down the rough edge.

On the top side of the pcb, push in R1, R2, C4 and AMP1. Solder the legs on the bottom side and snip off the excess. Be careful of the orientation of AMP1. There is a notch at one end of the chip. Push the breather tube onto the end of the sensor closest to the pins. The tube should be about 3m of 1/4" . Heat the end in boiling water to make it easier to push on. Solder SENS1 into the bottom side of the board. (pics shows an early prototype, on the new pcb SENS is on the bottom)

Get a length of 3-core cable (length depends on your river site). Strip a small amount of the cable and solder the brown into the hole marked +10V, the blue into the hole marked GND and the green into the hole marked SIG. At the other end, strip about 6" of the outer plastic and 1" from each wire. If you have a bench power supply, set it to 10V and connect the Blue and Brown wires. If you don't, you can use the 12V battery. Be very careful with the polarity (Brown to +ve, Blue to -ve) or you will blow AMP1 and SENS1. Spade type crimp connectors would be useful to attach the wire to the battery. Use a multi-meter to read the voltage between the Green and Blue wires. It should read about 0.1V and rise to 1 or 2V when you such on the breather tube.

When you get this far, let me know and I'll go through the next stage,
DaithÃ­
Top

Seanie,
Hope the gauge bulding is going well. I think the most tricky part for me was the damn phone, you really need a fine and good soldering iron, mines a piece of junk and it makes it a whole lot harder.
The Glens gauge is finally back in action, hopefully all glitches have been sorted.

I have used a larger 7.5AH battery as i was having power issues during the winter. Once the farmer out there has built his new sheds i'll be mounting the solar panel on it so hopefully get more sunlight especially during the winter.

Conor Allen here from Galway, also going to give the gauge thing a bash,
Daith I sent you a mail,

Quick Question, Does anybody know where I can get my hands on a plastic 2m ruler with large / clearly visible graduations of 10cm?? Similarly to the ones used for surveying?

I can give you a couple of stainless steel 1m rulers, I used them doing a survey on a pool (Engineer) but we don't need them any more, currently sittilg idle in cornor of my office. Your more than welcome to have. I'll be in clifden next weekend.

If you are looking at an expandbale survying staff they cost â‚¬100 ish + prob just as easy to make something for the purpose.

Adrian,
If you have any more of them wouldn't mind getting two off you, are the markings clearly visible?

PM'd you there
Top

I'm well on the way to having a gauge ready (cheers Daithi for the controller board), apart from 1 small problem....the phone keeps on dying.
Initially when the unit is powered on, the battery indicator on the phone shows full, but as soon as you try to call it, it begins beeping for low battery and switches off.

Ive double & triple checked the battery( 12V 1.2 Ah) and have charged it using using a mains charger.
The battery is staying a constant 12.3 V even during the call / recieving any text message's.

Anybody else experience this when they were setting up the gauge?
Is there a way to programme the phone ( administrator list, mail address etc) without using text's & calling the phone?