The weir in question (i assume) 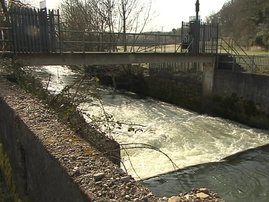 
Independent.ie - By Barry Duggan Friday April 09 2010 wrote: 'I would not be alive if it wasn't for Phil and Connie'
Survivor Derek prays for friends who died in kayak accident

THE only survivor of a kayaking tragedy last night praised his two friends for saving his life moments before the pair drowned.

A tearful Derek Elliott recalled the horror as his two friends, Philip Kelly and Connie Smith, died on the Clodiagh River at Portlaw, Co Waterford.

The trio had spent the evening kayaking along the river before tragedy struck at a weir around 9pm on Wednesday night.

"Phil went in to save Connie and if it wasn't for the two boys roaring back at me, 'Don't come in, don't come in', I'd be dead as well," Derek said.

"They saved my life and it's as simple as that. You'll never get something like this from your mind. My thoughts and prayers will always be with them. I wouldn't be here talking to you if it wasn't for them," he said.

Philip (31) from Co Tipperary and Connie (34) from Co Cavan lived together on the outskirts of Waterford city. Philip worked alongside Derek (26) from Knockaderry, Co Limerick, in the research and development laboratory of Teva Pharmaceuticals while Connie was employed with the Waterford City Council as an engineer.

After finishing work, the three friends began kayaking downstream along the Clodiagh River.

"We had kayaked a good few times before -- last year we did Arklow to Graiguenamanagh so we know what it's like. The two lads would be far better than me though," Derek said.

"We had one or two dodgy parts yesterday, there was a tree down at one place, but we got through it -- we were a small bit shook."

Upon reaching the weir at the old tannery in Portlaw, they decided it was too dangerous to traverse.

"I suppose because we all saw along the way how powerful Mother Nature can be, we saw this (the weir) and said it was too big. We turned back and pulled the kayaks out.

"Everything was out of the water. We walked down along here (through the Tannery), looked in gates and saw some dogs coming out. I don't know what they were -- they looked like rottweilers.

"One was looking at me and more came out. We thought: 'Jesus they could jump that at any stage.' We ran back up and said we'll go down it.

"Phil and Connie pulled the kayaks back in while I stood outside with the paddle in case any of them (the dogs) came down to belt them off."

"Connie said: 'Sure look, I'll tear down.' He went down and you could see the paddle swinging about. 'Jesus what is going on there,' I said. Phil went down to save him -- to make sure he (Connie) was alright. Phil would have been the best (kayaker) out of the three of us."

"I came back and climbed up. They had been thrown out of the kayaks. They had the jackets, the helmets and all the gear and were trying to swim -- I don't know.

"They said get rope, but there was nothing around so I started running.

"I started banging on doors. A Polish lad jumped the gate with me and ran back down. He was with me for 20 minutes trying to get the lads.

Emergency services were quickly on the scene, including Carrick-on-Suir river rescue and the Coast Guard helicopter, which proved crucial in the operation to retrieve the bodies.

"One fireman was willing to tie the clothes line around him and jump in," Derek said.

Both of the deceased were keen on outdoor pursuits. Kayaking trips to Lough Derg in a fortnight had been planned along with a hiking trip in Wexford as well as attending the Fleadh Cheoil in Co Cavan.

I must say it bears horrible a resemblance to the indecent on the Barrow, which also resulted in two deaths. You can read that report here.
Top

The MCIB report of this incident has been published and I've posted on the forum here:
http://forum.iww.ie/viewtopic.php?f=3&t=844&p=2960
Top

7.2 Prior to all river trips, a risk assessment should be carried out by walking the
bank over the full distance of the proposed route prior to embarkation and
noting the effect of recent rainfall on the section to be travelled.

I don't think this recomendation is practical, in many cases there is no clear way to walk the lenght of a river, it involves crossing private land, property boundries and in some cases marshland. On rivers that have a tow path it follows the canal rather than the natural course of the river, clashganney on the barrow is an example of this.

There is a question both from suppliers of boats and Canoeing Ireland about advertising training courses for people buying boats. While you can't force people to go, is that info available to new people taking up the sport?
Top

Ye I agree that scouting the whole river BEFORE paddling it isn't practical, especially ones like the above that are mostly just flat water but you can easily Paddle-Scout-Paddle-Scout... (where you see horizon lines, etc)


kmck wrote:There is a question both from suppliers of boats and Canoeing Ireland about advertising training courses for people buying boats. While you can't force people to go, is that info available to new people taking up the sport?

You see alot of these kinds of boats (old as shit) advertised in Buy and Sell or on Gumtree in the summer months. It should be suggested to Canoeing Ireland that they take out ads in the relevant sections of these resources advertising basic training courses and also offer a basic training course at a price that is low enough that someone that is outside of the regular kayaking/canoeing circle would consider paying for (doesn't need to be much, a little defensive swimming, throwbag work and lessons in basic river cop-on).


The Corkman wrote:The three experienced canoeists only decided to try to pass the weir after barking dogs forced them to change their minds about walking back to their car.

Report wrote:6.3 While none of the three men were members of a club or of the Irish Canoe Union, they had some experience of using this kind of craft and had managed to successfully navigate 90% of the planned route.

The word experience being used above (IMHO) is negligent and although highlighting a LACK of experience in this incident might be hurtful to some (family members, the survivor) I think it is necessary so as to avoid these types of accidents happening in the future.

For the record I didn't/don't know any of the involved and my opinions are based on what I have read about the incident to date and what I know about the standard of equipment used (or not used as it were).
Top

I'm not event going to discuss the use of the helicopter...

If we know of similar weirs should these be identified and kept as a database on the site? In otherwords man made weirs with no natural outflow.
Top

The recommendations don't seem to have been made with advice from canoeing Ireland. An SRT course would not be the first choice for people attempting novice river trips in sit on tops. I disagree that Canoeing Ireland should try to advertise courses everywhere boats are sold. It has trained hundreds of instructors to give basic kayak training, it does not take long to find someone advertising kayaking instruction if your willing to look and pay the cost of it. If buy and sell would generate business for rescue courses from advertising for one of the larger providers that perhap just suggest it to them.
087 9862517/ [email protected]
Intelligence is what you use when you dont know what to do
Top
Post Reply
18 posts